Well our time in London is up and we are about to leave for Paris on the Euro Star. I believe it to be a very fast train going under the Chanel all the way to Paris.

London was very cold and often windy, with a max temp of about 8, frosty but sunny in the afternoons. We had a few showers on our second day in London, but they were not heavy or lengthy. We stayed in Cromwell Road near Gloucester Station which made travel very easy, especially with their Oyster card, simple to use and a breeze to top up. 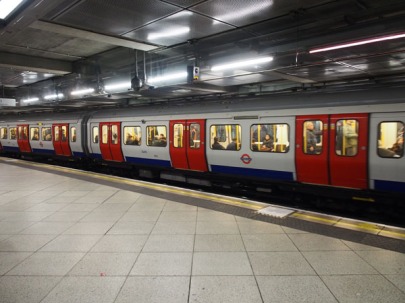 We did all the tourist places and were simply amazed at the numbers of tourists everywhere, the locals keeping well away from the main attractions. The museums and galleries didn’t charge admissions and the museum of natural history is amazing in its exhibitions and the queues were horrendous, with thousands of school groups, but it was good to see them make use of these facilities.

We found the prices to be somewhat expensive as we were getting a British pound for about A$2.10. The prices in the Harrods and Liberty stores were astronomical but they were swamped with customers buying items. Beer was very expensive a, 330 ml bottle cost me almost 6 quid but I managed to sample of few of their ales, which were quite tasty.

On the TV Australia was not mentioned once in all the new casts we watched. Isn’t anything worthwhile happening back home to make international headlines? We enjoy London and plan to visit again but only in the summer.

Just crossed off one of the 5 major items on my bucket list. Kay and I reconnoitered the Emirates stadium on the Sat so we knew where we were going on the Sunday. We arrived rather early for a 12 pm start, giving ourselves a good 2 hour period of grace. The temperature was a rather refreshing 5-6 degrees and a slight wind at us meant it felt almost as cold as the snow hotel. The teams appeared 30 minutes for a warm up session before the match started on time. We sat among the Arsenal fans and were drowned out by the noise when the gunners appeared. Play was down our end most of the time where arsenal were attacking. Howls of displeasure erupted when an obvious Leicester handball was missed. I immediately thought of the AFL umpire “Razor” Ray when he umpires the Collingwood games. A weak penalty  was given to Leicester and a goal resulted. The Arsenal supporters were not happy.

After half time Arsenal still had the majority of the play and after 15 minutes one of the Leicester players was deservedly sent off for his second yellow card. Arsenal attacked and eventually scored the equalizing goal by Theo Walcott. Fans were screaming for the winning goal and in the last minute of 4 minutes of time on, Danny Welbeck headed the winning goal. Boy did the Arsenal fans give it to the Leicester fans, they gave them heaps and every Arsenal supporter left the ground deliriously happy. It was a fantastic feeling, one almost as good as the parachute jump of 20 years ago

It was a tremendous feeling, 3 of the 5 items checked off the bucket list, Parachute jump, Northern Lights, Arsenal playing, and winning at the Emirates Stadium. Only 2 to go.